Shaping the culture means putting in the big rocks first. 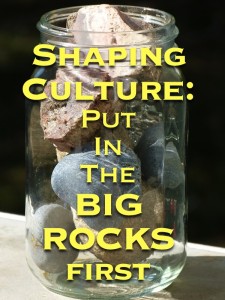 And the biggest rock is getting the gospel right.

After I left full time parish ministry I thought I knew what it was like out there. But I had no clue. Not only in other denominations which I visited for the first time in years, but even in my own tribe I discovered a lack of clear gospel proclamation. Then when there was sanctification/gospel response/third use of the law proclamation, there was no gospel to set up the response!

Call it laziness, ignorance or assuming the gospel to the point of forgetting it on the part of the proclaimer. Whatever you call it, the hearer most likely will miss it and fill in the blanks from whatever they know. And often that means what they know from their “old nature” or what we call “works righteousness.” That will then have a powerful affect on culture.

I once had a man who had a history of substance abuse going through the process of joining the church I pastored. He was many years sober and had been going through the adult confirmation process. Afterward we sat down in my office to talk it through one more time. He was concerned about two things: Even after going to many Sunday services and adult instruction he wasn’t exactly sure of this gospel thing and secondly he wanted to be sure I understood his history before I just welcomed him into the church with open arms. He thought that if I really knew his history I would probably deny him. So, big rocks first. We talked about grace and the gospel of Jesus Christ. This was so foreign to his experience that it took this additional time to talk about it personally before it hit him. Not earned nor deserved but a gift. Grace. Undeserved love through Jesus Christ. You could see it in his eyes. Shockingly good news of God’s forgiveness. But then it got personal. Was I going to extend that same grace and allow him to join as a member? He told me his history. It was as if he was asking me if I really believed it. Of course. I said. He could barely believe that I was actually living out the message that I was preaching. He looked at me like I was making a foolish mistake! Then we went on to talk about what that would mean for his life going forward. He became one of the most selfless and giving people in the church. Clear, explicit gospel and then clear explicit gospel response. He got it.

My stock went up in his eyes that day (because of Christ). But it also put me on notice! I needed to not only clearly preach grace and its response (because it is so often missed or goes over people’s heads), spelling it out for people, but I also needed to live out that grace! This happens in how we as ministry leaders deal with people and seek to influence them as their pastor and leader. No mixed messages can be sent. Careful, intentional consistent words and actions based upon grace needs to be evidenced in addition to hearing the gospel of forgiveness for ourselves. Big rocks first!

The trouble occurs when we get ahead of ourselves, when we assume the gospel, when we assume everyone gets it or assume they understand as clearly as we do (do we?). Trouble also comes when we get careless in our words and actions, forgetting the gospel and take a short cut to lead or influence based upon manipulation or intimidation. We need to be reminded that the sinful nature (ours and others) always presumes earning our way and deserving what we get and that comes across as favoritism or being judgmental or somehow forcing our will. If we do that we have forgotten the big rock of Jesus Christ.

Shape culture by paying attention to the big rock - of the gospel:

Shape the culture by paying attention to the big rocks first!