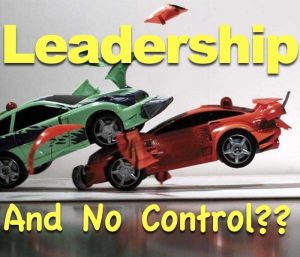 So, if you read last week’s blog, leadership is not about control.

GREAT! You might say. “I don’t want to be a controlling leader anyway! (I’m allergic to responsibility and I don’t like getting blamed!) What a relief!”

Careful. The opposite isn’t true either. Giving up control or no control is not the answer.

Yet some think that way. They mistakenly think that they can give up control or any kind of influence and excuse it as some form of servant leadership. For example: if people ask what you want as the “leader” and you reply, “Oh, I don’t care. What do you all think?” “I want to do what you want to do.” The motivation to back off of control or influence may be well intentioned. It may be an attempt to empower others. But it may just be a fear of being a responsible leader. Real leadership is responsible engagement and influence of others to reach a common goal.

According to Robert Greenleaf, Servant leadership begins when one first desires to serve and only afterward there is the conscious choice of aspiring to lead. The serve first leader or servant leader is one who shares power, puts the needs of others first and helps people develop and perform as highly as possible. This is compared to the “lead first” person who is about the accumulation and exercise of power. It certainly doesn’t mean that the servant leader loses sight of the purpose of the church or team or group or organization. There is still a higher calling and shared purpose for which the people gather in the first place. The servant leader still exercises influence and facilitates the group moving toward fulfilling that common goal.

So if a leader shouldn’t be “controlling” on the one hand or “give up control” or “no control” on the other hand, they will seek to exercise a healthy influence and facilitating others while keeping the common goal in mind for all.

This is not controlling but it is not abdicating control. It is not manipulation, but it is releasing and celebrating the gifts that are in the people. Stay tuned. More about this next time.

Leadership and No Control?