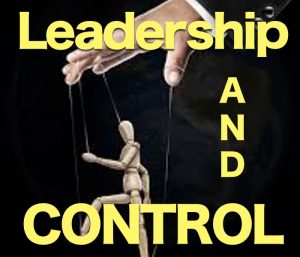 God is in control.

You can tell you are not in control the first time you want someone to do something and they either don’t do it or they do something different from what you thought you had told them.

So how do you react? For some their first instinct is to crack down on those who do not tow the line. These are the leaders who may think they either deserve or have earned or need or demand respect as the leader. If people aren’t following as they expect they go kind of "drill sergeant" on their team or followers. They exhibit a demanding attitude and maybe a sharp tone of voice. They get impatient and may even get louder or sprinkle their instructions with colorful language. The message is clear. They are trying to control what others do or don’t do. They may use shame or manipulation. They might even have good motives! Or they may be doing it for their own self esteem. They may even cover their demands with sweetness and honey. But they are trying to control people to get to the outcome they desire. Not good. Even if you get what you want. Not good.

So no matter the outcome, control for the leader is still a myth. As my coach told me a long time ago, “people don’t do what you tell them to do. They do what they tell themselves to do.” It is a huge difference that needs to be remembered.

Sure there may be those that respond to a controlling boss. It is sometimes easier that way. They know what is expected (supposedly) and they don’t have to think. They don’t have to take responsibility for anything. But they almost never go above and beyond either. If something goes wrong. It’s not going to be their fault. It will be their controlling boss who wanted them to do it that way! That is a lonely way to lead. Not to mention inefficient, less productive, exhausting way to lead.

Controlling, command and demand leadership may (emphasis on may) work for the short term emergency situation - but barely. And how often are we in those kinds of situations? Almost never and when we are it is often self imposed!

Leadership, which we defined earlier as “an individual (who) influences a group of individuals to achieve a common goal” (Northouse), is best done when that group of individuals participate willingly and buy into the common goal. It works best when they feel supported and appreciated by the boss and also by the team. In this way they give their best effort because they believe in the cause and feel a part of where they are going. That does not happen very well with controlling, commanding, demanding, authoritarian leaders.