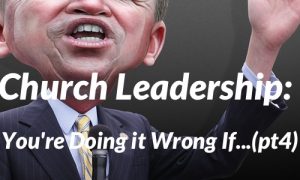 …you talk too much. Then when you do talk you don’t speak honestly and directly about what’s going on, where you want to go and how you hope to get there.

The truth is that many leaders talk too much. They get used to people waiting for them to speak. They get used to people being quiet when they speak. They get enamored with their voices. Do you really think you are that smart? Do you really think people are that interested? the truth is that people will often defer to the designated leader because it is the safe thing. They don’t want to lose face over saying something that will just be disagreed with by the leader. They don’t want to speak first without knowing what the leader is saying. So they will defer. They will be quiet. They will become more passive. Then if we are a leader who is afraid of silence we will fill the void. We’ll talk all night if necessary. We’ll lead the discussion. We’ll give our opinions. We’re supposed to lead, right? Newsflash: You talk too much. Eventually people will get the message that what they say doesn’t matter. So they will slowly disappear, with some dysfunctional exceptions.

But there is always the other side of the coin. You talk too little! You always defer! Then when you do talk you hesitate and hedge your comments with obvious doubt and a lack of confidence. People want to follow someone whose purpose aligns with theirs. But if you can’t articulate that purpose and the priorities it requires then people will begin to drop away. You will lose them.

Golden State Warrior’s NBA coach Steve Kerr (who is in the finals beginning this week) began his tenure as head coach by doing something unique. As the story goes, the team was less than unified. The former coach was more command and demand and didn’t like the assistant coaches talking to the media. So one of the first things Kerr did was meet with many of the players in the off season - flying out to see them wherever they were. He wanted to get to know them and listen to them. Then it was reported that he told them, “Here is what I’m hoping to do, here’s why and here’s how”

Now that was unexpected and interesting. The results are obvious. The Warriors are favorites this week.

Walmart’s leaders also don’t hide in their offices in Bentonville AK. Every Monday twenty three jets take off with their leaders to Walmarts across the country. They walk the stores and talk to customers. Then on Saturday morning they report back to one another about what they heard. Only then can they make truly wise strategic decisions about the company.

For those of us who lead churches, if we are talking more than we are listening we are in for trouble. Stop talking at the meeting and instead ask questions. Get curious. We need to listen, yes to our members, but far more importantly to our unchurched neighbors and community. Only then will we, both leaders and members, really know what’s going on and how we can bring others closer to Jesus.

As a “Coaching Leader” we need to: