If…you are doing it alone. In other words, if you are calling all the shots and making all the important 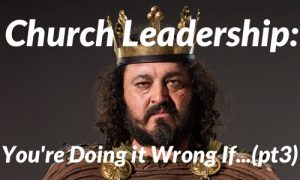 decisions yourself and if you do not involve others in the process of making those decisions. If that is you, then you are doing it all wrong.

This way of leading is also known as:

Yet some of these same leaders (and maybe you) speak from their blind spot and say:

Well, why is that? Perhaps it is because their idea was ignored or given lip service before (maybe even by you). Perhaps their idea was used but you took the credit. Perhaps it is because they know that you are not really interested in their contribution and they know you will do what you want anyway! Perhaps it is because in dozens of past experiences they were sent the signal that they were just a hired hand or a functionary and were not trusted with anything of significance. Perhaps they were shut down when they tried to weigh in before. What that looks like to the authoritarian/solo/command and control leader is that the rest of the team doesn’t want to be involved, doesn’t contribute ideas and doesn’t seem to care. But the secret truth is that after the leader behaves the way he or she does, why wouldn't the followers act that way?

Don't fool yourself into thinking that you are not guilty of this. We as leaders can easily be self deceived into thinking we are not command and control leaders just because we also asked people what they thought. When did you ask? At the beginning? At the design stage? Or after everything was already decided? If so it was not very sincere now was it? No, that kind of asking can easily just be window dressing or fooling ourselves. We had no real intention of changing what we were going to do but we asked people anyway because someone said we should. The reality is that people can see right through that insincerity. They know if they are really being involved in the process or it is just a facade or a charade.

Much of what shows up as command and control or solo leadership is someone who needs to be in control or is afraid or prideful. We say “control” because the leader doesn’t trust anyone else. “Afraid” because they think if they involve someone else it will not go well or it will be messed up (Not the way YOU would do it). Finally we say “prideful” because they think they have the best ideas.

Please understand, people are offended if they are not involved in a decision that will affect them especially if there is a cost involved. People are not stupid. They know if the process of involving them is genuine or not. They know when a leader is just going to do what they want anyway.

Leadership is not a solo sport. It is not an opportunity to be the “king.” People know when they are being valued and when they are being ignored or even being used. Some will put up with it longer than others but at some point people will “check out.” That means they might not quit (at least right away) but their heart will not be in it. They will no longer come to the ministry role or task with the passion that they once did. If they are volunteers or lay people they will begin to find other priorities in their life rather than serve wholeheartedly at the church or for the ministry. They will be “busy” when asked to help.

Have you ever attended a church “cottage meetings” to discuss a major decision: building a building, calling new staff, initiating a new ministry such as a school, planting a daughter congregation etc? Maybe you even heard someone say afterward, “well, it doesn’t really matter, they are going to do what they want to do anyway” or “well, they won’t listen to me.” If you have heard that, chances are that instead of really mining the wisdom in the room and drawing out good ideas, those cottage meetings where just “sales meetings.” In reality they were meant to sell people on what has been decided. That also means it is time for repentance and confession by the leaders!

You can’t short change the creation of good ideas, engagement of the team or congregation and the buy in from the same. It takes time and effort. Ideas will change, learning will occur on all sides of an issue. But with careful genuine effort the results can be miraculous! Without that effort and short changing things by doing it yourself or forcing your way will most likely result in hurt feelings, less enthusiasm, less participation and stalled progress. It might also result in reduced attendance or worse. The saying is true: people will "buy in" when they have a chance to "weigh in."

It may seem like wasted time allowing people to weigh in. It might seem like it takes forever to build ownership and engagement and consensus. But it is going slow in the beginning in order to move fast later. Put another way, just imagine the wasted time you will avoid in doing it right the first time. Forcing things like some “king” always seems to end up dealing with all kinds of negative things later, like resistant people, feeling like you need to "re-sell" something and dealing with hurt feelings. Talk about wasted time!

Certainly not everything needs to be a group process, meaning the entire congregation. Yet there are teams or committees or groups that are gifts from God that should be respected and consulted. “The eye cannot say to the hand, I don’t need you!” (1 Cor 12:21). Engaging people, asking for their input and ideas and squinting with your ears is powerful and wise leadership.

Stop acting like a king. Stop doing it yourself. Stop being so impatient and calling the shots. Engage people, sell the problem, build consensus and align people around solutions and then celebrate the results. That’s real leadership.