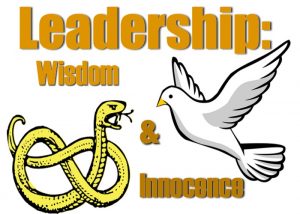 A number of years ago while still in seminary, a friend and I were having a conversation. As a reflection on what was said, my friend quoted Jesus. He said, “Like Jesus said, ‘wise as serpents and innocent as doves.’” That is from Matthew 10:16.

That conversation and that quote has stuck with me and come back to me many times. It is a great one also to shape our perspective on leadership. The context of those words was Jesus sending out the twelve to go to the “lost sheep of Israel” (v. 6) and Jesus said they were being sent “like sheep among wolves” (v. 16). It is reminiscent of the words of St. Paul in Romans 16:19 when he said, “I want you to be wise about what is good, and innocent about what is evil.” Perhaps it also reminds one of the parable of the shrewd manager where Jesus said, “for the people of this world are more shrewd in dealing with their own kind than are the people of light” Like 16:8.

All are good verses for instruction. They also remind me of the common sense wisdom that simply says, “don’t do anything stupid!” How many times haven’t we seen or heard of experienced a leader who shoots themselves in the foot by doing something stupid? Perhaps even ourselves! For example, it is a leader who comes in late, unprepared (for the meeting or even the service), unkempt or even dressed inappropriately. Or worse, how about a leader who misses appointments, doesn’t return emails or phone calls, shows favoritism and cannot manage their own temper? Or even worse, a leader who shows up under the influence, who flirts (or more) with those who are not their spouse? That is shooting yourself in the foot. That is not being wise or as shrewd as a snake.

As christian leaders, it can be tough out there, like sheep among wolves. So the call is to be wise, be shrewd, use your brain. Think about what you are doing. Live and lead intentionally and thoughtfully and not be pushed and pulled by your emotions. Ask the deeper question. An immature leader might ask, how can I get the upper hand or how can I get my way or worse, how can I get them back? But a mature, wise, shrewd leader asks, what is going on? Why is it going on? What are my options? How can I respond without making it worse or creating unintended consequences but instead make things better? What is the big picture? Yet it is not shrewdness that degenerates into manipulation or even suspicion because it is combined with innocence.

So, what about the “innocent as doves” part? That not only gets to how you do what you do…not underhanded, not manipulating people, not saying one thing and doing another…but also your motives behind what you do. It is innocence that is born of Christ. It is not marred by impure motives or vengeful thoughts. It is not selfishly wanting “my way” so I can feel better. Rather it is an attitude that comes from a place of worshipping Christ, of expanding the kingdom, of serving and blessing others and not self. And yet this innocence is not naiveté because it is combined with wisdom.

This is the kind of person Paul was talking about in Titus 2:7-8, “In everything set them an example by doing what is good. In your teaching show integrity, seriousness 8 and soundness of speech that cannot be condemned, so that those who oppose you may be ashamed because they have nothing bad to say about us.” Imagine a leader who handles themselves with this kind of shrewdness or wisdom and this kind of innocence. This leader will be able to make the hard decision, knowing it will not be popular but will be accepted because there will be trust. This leader will know that while people may not like it, they will know that the leader is not prone to flying off the handle, being manipulated or manipulating or making rash decisions. They will give this kind of leader the benefit of the doubt.

Of course a wise leader will also involve as many people in the decision as possible. They will engage people and not insist on top down. But that is the subject of another blog.

Coaching questions:
1. Do people trust you as a leader? Why or why not?
2. What habits, behaviors, or tendencies might you have that are not wise?
3. How do you need to think first or think more before speaking, acting or reacting?
4. What default thinking undermines the innocence or purity of your motives and your actions as a leader?
5. What is your next step to upgrade your integrity as a leader?