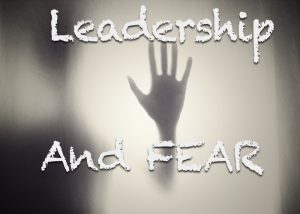 What are you afraid of?

It’s hard to put yourself out there when you think you will fail or when you feel like you will be the victim of a “sneak attack” when you least expect it.

After a while some leaders have been the victim of so many nicks and cuts and bruises from getting knocked down that you are not sure what to do. Fear may feel like paranoia and your spouse may think you’ve been watching too many conspiracy theory movies. But you know how this movie ends. You initiate “A.” Your people respond with “B.” “A” doesn’t get done, in fact it is criticized and you along with it. Life is miserable. Why would you ever want to risk anything again? Your goal is not to make people angry. So you revert to the safe behaviors that will get you by for that week or that day or that hour. Then when someone asks you what you think or what you want to do you honestly just don’t know. Call it fear or call it just being stuck.

It’s a lonely way to lead. It is a frustrating and exhausting and discouraging way to lead.

How can you lead amidst fear and criticism and resistance? There are a few important items to remember.

Taken together a leader can inch their way out of being stuck and live more intentionally into the freedom that is theirs in Christ.