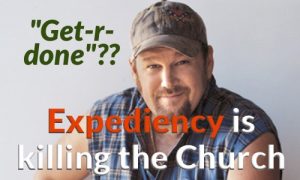 Expediency
[ik-spee-dee-uh n-see]
noun, plural expediencies.
1. The quality of being fit or suitable to effect some desired end or the purpose intended; suitability for particular circumstance or situation.
2. Pursuit of the course of action that brings the desired effect even if it is unjust or unprincipled.
3. An expedient.

Church and ministry is often limited to a few individuals. The decision makers in a church merely swap chairs during the nominations and elections time. You will hear, “No one wants to do anything anymore.” It is often a self-fulfilling prophecy. We have bought into the Pareto Principle which says that 20% of the people do 80% of the work. We see it happen over and over again and so think we are doomed to that rule of thumb or worse. Those who do the work can become self-righteous and may even blame those who do not get involved. Those who are not doing the work may resent those who do or may simply not want to get involved with those people who “try to control things.” It is often not a pretty picture.

Often expediency is favored at the expense of real discipleship. The result is that unfortunately the 80%, or the crowd, doesn’t do meaningful ministry, they are not really engaged and are often mere observers or consumers and little is done to change it by the 20%.

There are many reasons for this. One reason is intellectual, as in “anyone who is going to do meaningful ministry must be properly trained, approved, put their time in, mentored etc.” This may have some grain of truth in it. There is often a need for the training of pastors and teachers. There is often a sense of maturity that is needed for those who are in front of others. We want to ensure quality and doctrinal correctness in what is given to others so standards are set and enforced. Yet sometimes the intellectual argument also feeds into the leaders ego. They lose their sense of humility. “We know what is right and it is decided.” Sometimes a leader keeps others from being approved because they are threatened by them. But often times it is just easier. It is expedient for the “approved” to do it themselves. They are already approved. Let’s not rock the boat by engaging and nurturing others.

Sometimes the reason is practical. The thinking goes like this, “I’ve tried getting others involved but they mess it up, they drop the ball, they don’t show up, and it takes far more work to help them do a little bit. I might as well do it myself.” So people do. They do it themselves and in so doing they fulfill the Pareto Principle. Few people will do the work. It is expedient.

Yet this is totally against the teaching of scripture. “So Christ himself gave the apostles, the prophets, the evangelists, the pastors and teachers, 12 to equip his people for works of service (diakonia - ministry), so that the body of Christ may be built up 13 until we all reach unity in the faith and in the knowledge of the Son of God and become mature, attaining to the whole measure of the fullness of Christ. 14 Then we will no longer be infants, tossed back and forth by the waves, and blown here and there by every wind of teaching and by the cunning and craftiness of people in their deceitful scheming. 15 Instead, speaking the truth in love, we will grow to become in every respect the mature body of him who is the head, that is, Christ. 16 From him the whole body, joined and held together by every supporting ligament, grows and builds itself up in love, as each part does its work” Ephesians 4:11-16.

Or what about the body of Christ metaphor from 1 Corinthians 12 where it says, “Now to each one the manifestation of the Spirit is given for the common good”? Is not the body of Christ crippled? Is it not hampered if we buy into the Pareto Principle? Yes!

But it takes way too much work! People are slow learners and I don’t have the patience! We’d never get anything done if we had to rely on half developed people to teach Sunday School, run VBS, lead the small group or anything else that needs to be done!

So, are you arguing that expediency is more important than growing people? Because that is what you are saying. The dirty secret is that we also don’t want “our” program to fail. We don’t want look bad to others or have them laugh at us. We might even say that we don’t want our church to look bad and so we really need to rely on the seasoned volunteers or those who can be sure to get it done right.

But stop for a minute and think. If we don’t put people development first then A) people development (discipleship) will never happen or only happen rarely or by accident, B) we are in danger of wanting to be the hero or needing all the strokes and “attaboys” (because we don’t get our affirmation and value from being God’s baptized child!) C) we are in danger of leaving huge chunks of ministry on the table because the 80% are unengaged and their lack of growth severely limits and cripples the body of Christ not to mention the growth of the kingdom of God as in less people will come to faith! D) people will be robbed of the joy of seeing God work through them and finally E) praise to Jesus will be severely diminished as well.

Expediency should be sacrificed for the sake of people development. This is the reason many churches are shrinking and failing. The answer is not in a program. Programs don’t last, transformed, growing people last. Programs can be ignored, but relationships were others invest in you are valued and cherished. It’s not about the task. It’s all about people.

Who can you love in the name of Jesus? Who can you invest in? At the same time, who is investing in you? We can’t give what we don’t have. It begins with being connected to Christ and it continues as we intentionally connect with one another. “As iron sharpens iron, so one person sharpens another” Proverbs 27:17.

Trash the expediency of doing it yourself. You really are are getting in the way of ministry. The work will happen, maybe not how you want it to, but it will get done and along the way, people will get done too. But it takes an intentional choice.

Now, what are you going to do about it?

Sign up for our email newsletter with new blog posts and information and announcements: 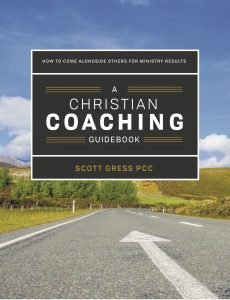 Check out our new book here: A Christian Coaching Guidebook, How to come alongside others for ministry results

Expediency is Killing the Church