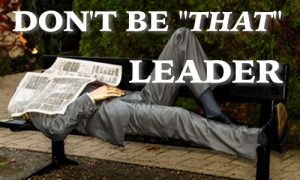 Recently there have been some situations in our household where we have had to employ the advice and services of others. Nothing serious, but contacts and encounters with lawyers, service people for various things around the house, for the cars, plus travel companies and others have touched our lives. After a series of encounters with all of them there are a few things that I have come to really appreciate:

Then there are the others. You can probably guess at what makes them “others”:

What that may also means is that possibly WE don’t know who WE are! Unfortunately there can well be a blind spot for leaders regarding these simple human interactions. We see ourselves as nice people and we bend over backwards to show kindness when we are with others. But sometimes out of sight, out of mind characterizes our follow through. It may also explain our lazy or non-responsiveness to others when it comes to voicemail, text and email. We may even excuse ourselves to not respond to people in a timely way because we are so busy. You know what? That’s not fair. You don’t like it and I don’t like it from others. So why do we excuse ourselves?

Imagine: What if someone wants to make a significant contribution to the ministry and so they ask for a meeting with the pastor. But the pastor is unresponsive to attempts to make an appointment? What signal can you imagine this sends to the person who was motivated to give? Rightly or wrongly, fairly or unfairly it says “not interested” and their motivation to give will decrease along with a lot more. Far worse, what if that person had wanted to talk about Jesus?

We view ourselves as responsible and honorable yet how often are we just not paying attention to what we say to other people? (Or we don’t care!) We almost instinctively tell people what we think they want to hear by making promises, implying some actions or resolutions. Then when we walk away the things we just said evaporate from our memory. The reality is that if we don’t pay attention to what we said we certainly won’t pay attention to acting on it. Some people get annoyed. Some people get angry. Other people get hurt. And what do you think enters the mind of the one who is open about Christ but encounters this kind of person? It’s not good.

This is not a blog that says we should be people pleasers, this is simply about being honorable, reliable and dependable. We need to be people of our word. It is a plea for integrity and professionalism. It is a plea to get up off the couch of casual and get serious. It is a plea to “do unto others…” (Luke 6:31). Shouldn’t we be embarrassed if we forget a meeting or appointment and/or are unprepared? Or do we blow it off because so many others seem to do that to us? Look at yourself in the mirror. Don’t be “that” leader!

We hear your words but we notice your actions. Would you follow you?

Don’t Be “That” Leader