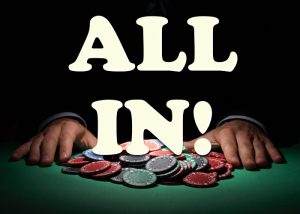 It’s now the fourth week in January. Have you given up on your goals for 2017 or are you “all in?” In poker, going all in is risking it all. You are betting all your chips. There is no holding back. Another way to put it is that you are “sold out.” It is that place where you are going to take your stand. Martin Luther at the Diet of Worms said at great risk, “Here I stand, I can do no other.” For him it was the eternal life and death difference of the gospel itself. For you and your goal(s) for 2017, are you also convinced and unmovable about what you are endeavoring to do? If you aren’t then you’ll probably get distracted along the way and nothing will really be different.

Sometimes we in the church are just not that serious or passionate. Sure we meaningfully go from week to week. We are attentive to worship, preaching and Bible studies. We visit the sick and shut in. We attend meetings. We trust that the Word will do its work and that we are stewards of the mysteries of God. But we don’t really want to rock the boat. We don’t want to take risks. If you’ve been a professional church worker long enough you’ve experienced criticism and harsh disapproval on things you thought were trivial. You’ve got some scars. Those experiences will sap our enthusiasm and reduces the length to which we will stick our neck out. So we bump along from week to week. Then as my home pastor once told me. “You can hide a lot of laziness in the ministry.” The question is, what are we risking for God? What are we willing to stand for? Over what are we willing to go “all in?”

In other words how adamant are you with what you want to get done? Have you made your mind up that what you are focussing on in 2017 is worth the effort, the resistance, the criticism, the snickering and laughter of others, the loss of sleep, the anxiety and the energy expended to make it happen. It is worth it? For something to be that significant it had better be bigger than yourself. There is no time or room for selfish or self serving goals. Rather we are being called to join God in the mission of God. Is it God sized? This is about eternal things.

I remember an exchange years ago between myself and someone who was meeting to decide the paint for the church. They were upset because the evangelism committee had apparently taken the meeting room where they wanted to meet. I heard about it! Finally I said, probably somewhat in frustration, “God cares more about people than paint seven days a week and twice on Sundays.” I’m not sure whether they totally understood what I was saying but they understood that I was not going to be a pushover with this one. Being witnesses, being evangelists who by God’s grace endeavor to bring people closer to Jesus was where I was willing to take a stand. It was a self defining moment.

So what are you standing up for? Where are you sold out or all in and will not give up? Sometimes we are afraid because if we fail we think we will look silly. Sometimes we are afraid that if something doesn’t go off well we won’t look like we are worth our paycheck to the board. So we want there to be an illusion that everything is just fine and dandy. Have you ever heard yourself covering up mediocrity by saying things like, “It was a nice event (when it wasn’t)” “Elizabeth and her team did a great job (when they didn’t)” Or “we have some great things planned for 2017 (but it is nothing more than you did last year!)”

No one is suggesting that we shoot ourselves in the foot or do or try something that is not attainable. Yet if we are always succeeding then we are not thinking big enough. After all, failure is a great teacher and no one ever learned by making sure everything was going smoothly. William Carey whom some call the father of modern missions said, “expect great things from God; attempt great things for God.” St. Paul in 1 Cor 9:19-23 says he was willing to suffer all and sacrifice all so that some would know Christ. This steadfast, persistent, adamant, suffer all for God attitude is a holy, faith conviction. It is something that others will see and want to join. God inspires people to action when they see something happening that is bigger than themselves. They will also begin to sacrifice, serve and “suffer all” because they see that it will make an eternal difference. (By the way that’s also why no one wants to volunteer for that thing you do that doesn’t seem to make a difference!)

So, for what are you willing to go “all in?” If what you are doing today, tomorrow, next week and next month is not that, then you probably want to rethink where you are spending your time and also your goals. Is it clearly defined? Is it God sized? Jesus gave it all for our salvation. In response we also can go all in for Him.